Replacement for Soapy next season..... 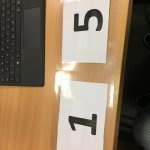